THE TAHKOLUOTO TERMINAL CAN HANDLE MORE THAN 160 RAIL WAGONS A DAY. ANNUALLY, THIS AMOUNTS TO MORE THAN 3 MILLION TONNES OF COAL. THE AMOUNTS ARE SET TO INCREASE IN THE FUTURE.

For a long time, the deep-water port in Tahkoluoto received North American and Australian coal vessels. The coal transported by these vessels was used as fuel for the two power plants in the area. Now one of the power plants has been demolished and the other is not used much. However, the area is well-prepared to handle coal. Thanks to Rauanheimo’s terminal operations, the traffic has turned to the other direction, and coal from Russia is now transported to Europe, the Americas and Asia via Tahkoluoto. The investment in the terminal was made at the right time, as the global market price of coal has started to rise sharply.
Rauanheimo started operating in Tahkoluoto in 2018, after which the area has been developing rapidly. In summer 2021, a new terminal suitable for handling large bulk flows was opened. The basis for the terminal project was the coal terminal machinery bought from an auction. After a coal terminal in Estonia was closed down, its German ThyssenKrupp conveyors and yard machinery, which were in good condition, came up for sale. Rauanheimo quickly decided to buy them. Next, the machinery needed to be transported and placed in Tahkoluoto.
– The terminal is like a small production plant, says Tero Kosonen, Rauanheimo’s Managing Director. In addition to good machines and plans, the project needed staff to be competent and committed and have a great attitude in order to be a success.
Patience was also needed because moving a huge terminal ensemble to a new location is not simple. The project department also gets special thanks from Sami Veneranta, Operative Manager of Adolf Lahti, who is responsible for the operations in the port.
– For example, making the 17-metre-deep hole required by the machine watertight in the middle of winter was quite an effort, Veneranta says.
Thanks to good planning, some of the operations that originally felt challenging ended up going smoothly. For example, the biggest parts of the terminal – shiploader, stacker and reclaimer – could be transported from Estonia to Tahkoluoto whole.

The service provided by Rauanheimo includes transporting the coal from the Russian border onto a vessel in the port in Tahkoluoto and all the handling in between. The high quality of the product is ensured with sampling and metal removal processes. The large storage capacity guarantees short delivery times. Thanks to the new terminal, the handling of coal in Tahkoluoto is significantly quicker, more efficient and more controlled than before. At the semi-automatic unloading station, the coal in the train cars is dumped onto the conveyor, which conveys the coal to the storage yard and from there onto a vessel with the help of loaders. Loading can also be done sideways, which makes it possible to load the vessel evenly. The process also involves metal removal using magnets and weighing.
The process will be made more efficient with new heating halls, the only ones in Finland, which speed up the handling of coal when the temperature is below zero. The conveyors and the semi-automatic machines have not only increased efficiency but also raised the safety and environmental friendliness of coal handling to a new level. The nature of the work has changed, and fewer employees are needed for laborious tasks. Sample collection is also now done automatically. The terminal’s conveyors are mostly covered, which makes it possible to handle cargo flows without dust build up. In addition, the yard is equipped with 22 water cannons. The entire process is powered by electricity generated from renewable sources, the consumption of which is optimized from the control room controlling the entire facility.
The Finnish state and the City of Pori have also invested in the port and its transport links. The electrification of the Mäntyluoto and Tahkoluoto railways was completed in late 2020. In addition, the capacity of the railway has been increased near the port in particular.

Watch our brand new video that presents the terminal in Tahkoluoto. 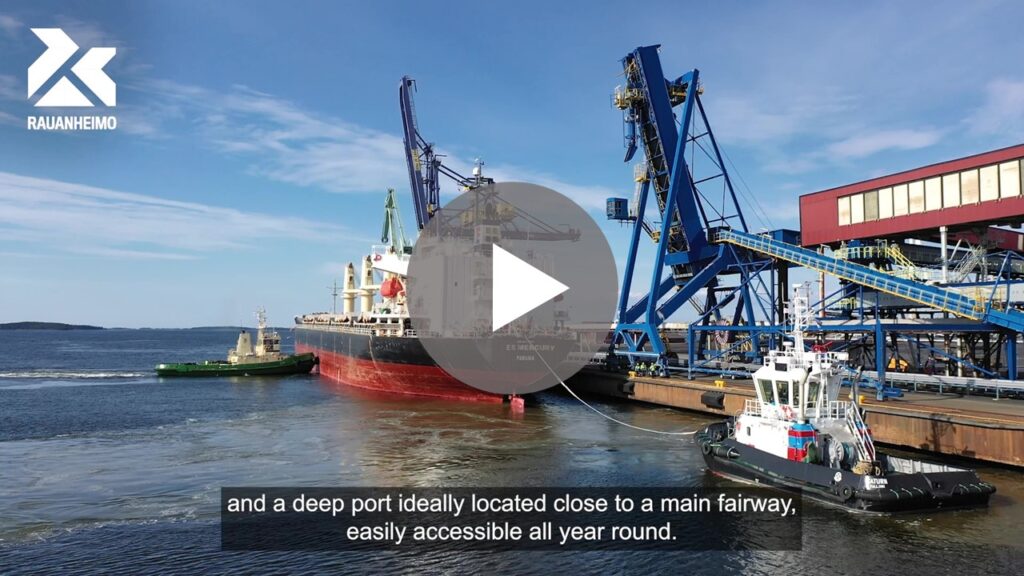 You can find out more about which cookies we are using or switch them off in settings.

This website uses cookies so that we can provide you with the best user experience possible. Cookie information is stored in your browser and performs functions such as recognizing you and your language when you return to our website and helping our team to understand which sections of the website you find most interesting and useful.

Strictly Necessary Cookies should be enabled at all times so that we can save your preferences for language and cookie settings.

If you disable these cookies, we will not be able to save your preferences. This means that every time you visit this website you will need to enable or disable cookies again.

This website uses Google Analytics to collect anonymous information such as the number of visitors to the site, and the most popular pages.

Please enable Strictly Necessary Cookies first so that we can save your preferences!